The body of Shinsuke Maeda, a wealthy older man, is discovered in his garden. While at first glance it appears that he missed his step while exiting into the garden and hit his forehead on a flowerbed rock, it is established that a safe installed in the living room has been emptied. It seems that, the night before, Maeda left the hospital he was staying at of his own will and came home, and was robbed immediately after returning. His daughter Yumie Nagano insists that Chikako Inui, a woman her father had been seeing, must be the perpetrator. She says that Maeda was thinking of getting married to Chikako soon. However, Chikako finds Yumie and her husband suspicious. Troubled by debts incurred by opening their ramen store, they pestered Maeda and he pushed them away. She calmly points out that Maeda gave her a will in which he left all of the 50 million plus yen hidden in the safe to her, so she had no reason to steal from him. 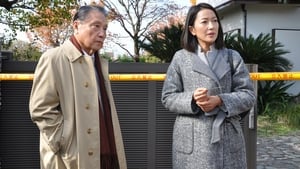