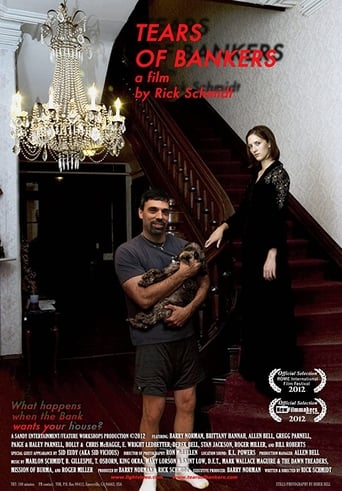 TEARS OF BANKERS follows the mortgage meltdown of Mr. Barry Norman's B&B, owned and operated by himself and his wife Brittany (Brittany Hannah) in the small town of Rome, Georgia. At the beginning, Norman states his distain for bankers; they will rule soon on his loan and prospects for the future ('ten words that decides basically the rest of my life'). Since Norman has kept his present financial problems secret from Brittany, she's remained confused by her husband's increasingly erratic behavior. As the loan deadline approaches, Norman wonders if he will again lose a house AND a wife (his second) to the machinations of the banking industry. Only a miracle can save him, as the money men move in for the kill.