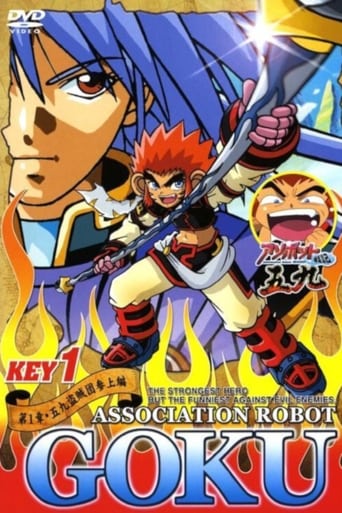 Monkey Typhoon tells the story of three asobots —a form of robots whose general title is a portmanteau of the words association and robot— Goku, Tongo, and Joe. They are assisted in their journeys by Sanzo, a human, the son of the creator of the asobots, and Suzie, who joined them after her father was cured from the Destruction Virus. Later on they are joined by their former rivals Miyon and Shiyon. Their quest is to stop their world's destruction by collecting the legendary 49 keys to unlock Tokyo Metropolitan Government. Along the way, the asobots gain the ability to evolve further. Together, in their many voyages, they come across several foes and enemies such as Loki, Ryutaro Demon, the Quartet, King Doberman Pinscher, and many more, as well as grow united in their friendship.